Carla Denyer and Clive Stevens are the two Green Party councillors for Clifton Down ward.

The last local election was held on 5th May 2016. Our candidates Carla Denyer (1st) and Clive Stevens (2nd) together got 32.2% of the vote putting us in first place ahead of Labour. 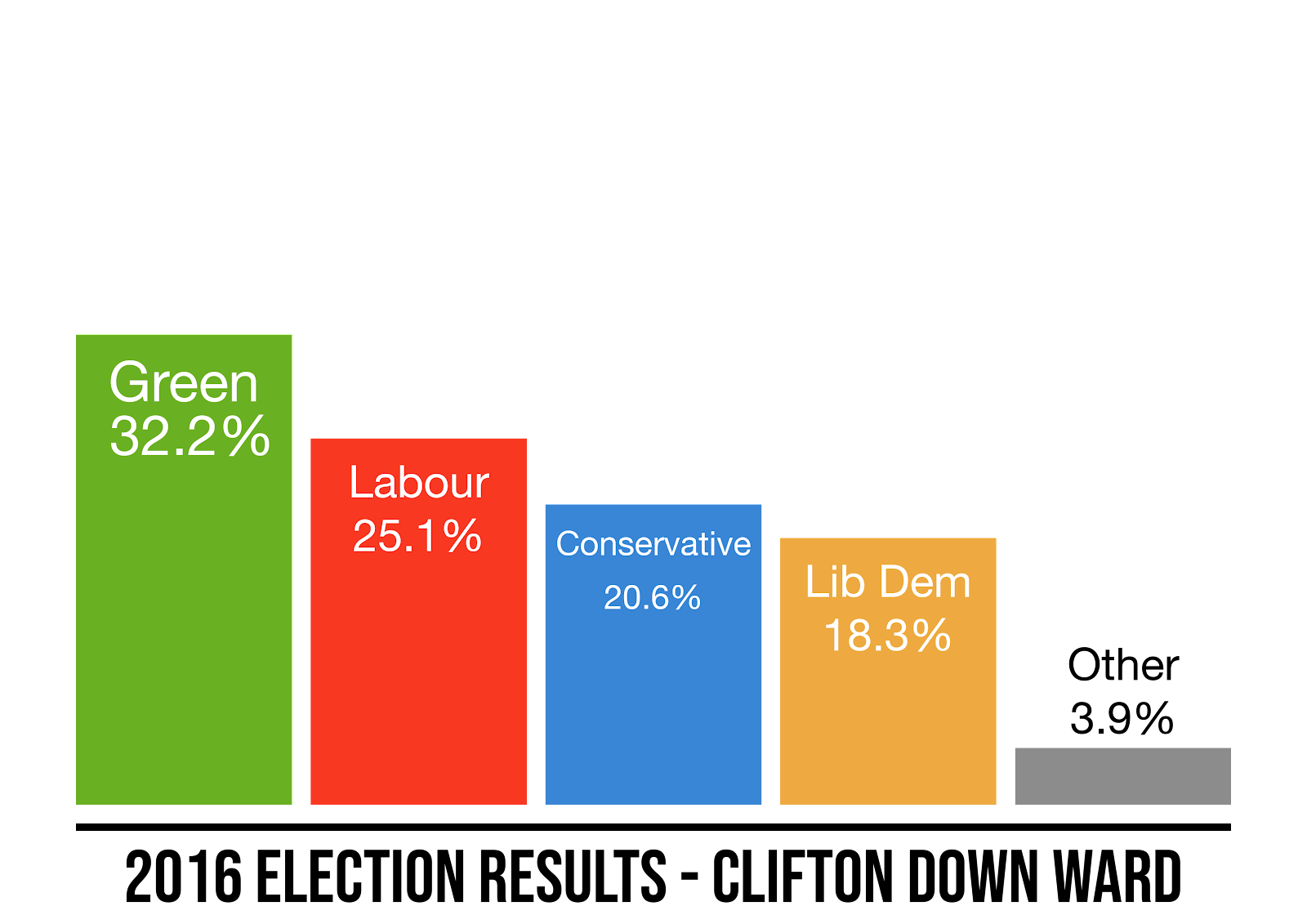 For the next local election in May 2021 the Green Party candidates for Clifton Down are Carla Denyer and Tom Hathway.

There are lots of great things about living in Clifton Down ward. It’s a vibrant place with great shops, restaurants and cultural venues, as well as quiet residential areas. We are lucky to have the Downs on our doorstep and our own local train station.

But Clifton Down also has its problems. As one of the most densely populated wards in the city, the cost and quality of housing - especially privately rented houses and flats - can leave a lot to be desired. That population density also causes issues with noise pollution, parking, fly tipping and congestion on Whiteladies Road.

Many residents often tell us they are concerned about citywide issues too; such as air pollution and protecting funding for public services like social care for the elderly; and global issues, especially climate change. 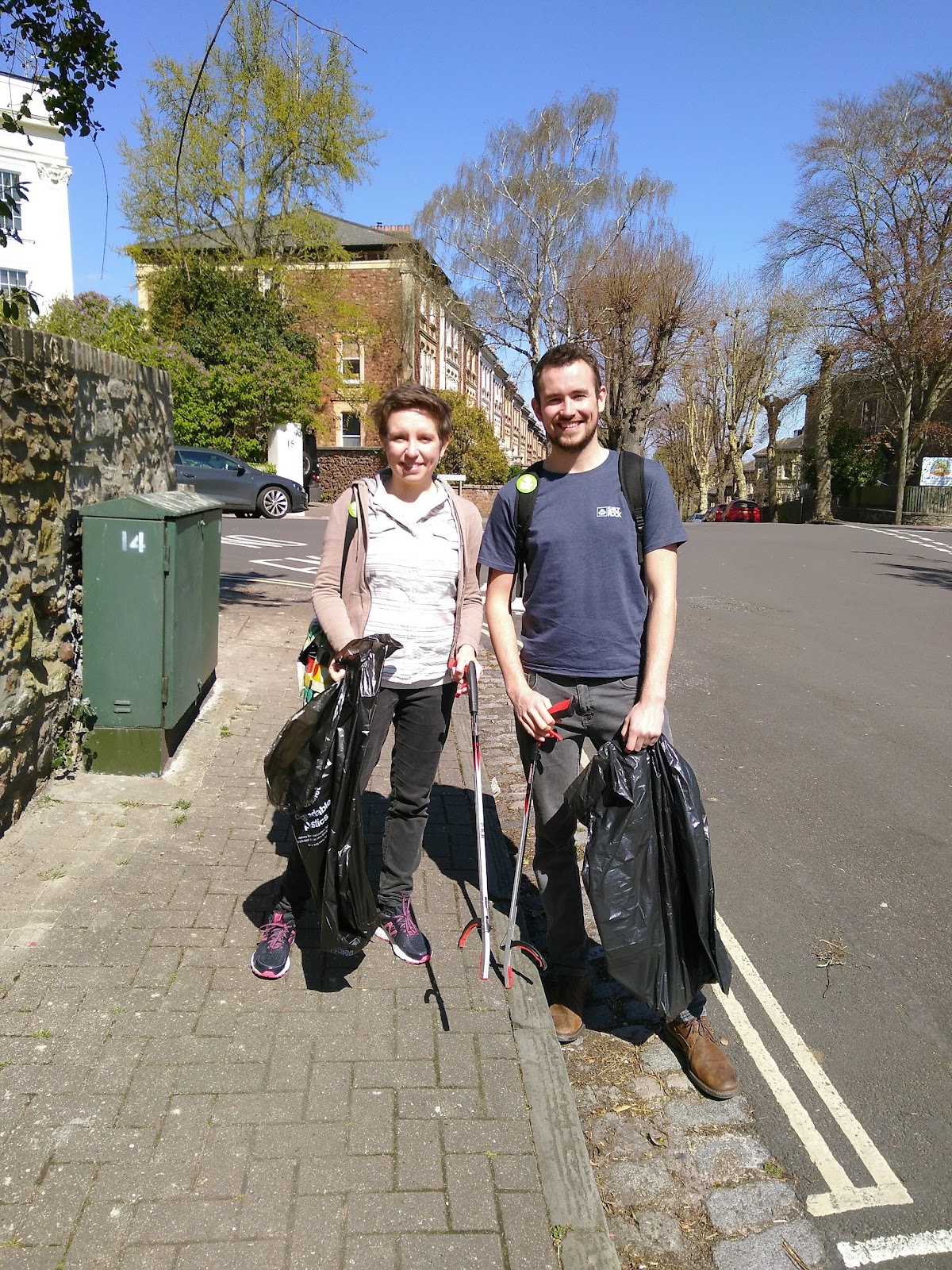 Carla and Tom on a community litter pick in Clifton Down.

Carla, Clive and Tom are already doing what we can on these priorities. To enable us to continue our work...

Vote Green this May to re-elect two Green councillors.

About Carla, Clive and Tom

Over the last four years, your Green councillors have worked hard for you.

They have an quarterly e-newsletter with updates about work they are doing, events in the ward, consultations that residents may want to respond to, etc. You can read the latest issue here and subscribe here.

Carla is an award-winning councillor who led Bristol in declaring the first Climate Emergency in Europe, committing the city to go carbon neutral by 2030. She was instrumental in the successful campaign to get Bristol University to drop its investments from fossil fuels. She fought Labour’s plans to close Redland Library. And she secured better street lighting and safety improvements on three dangerous local roads.

Clive has helped lead citywide work to address the impact of university expansion on housing and used his business expertise to scrutinise the Council’s financial decisions. Locally he has supported residents with concerns over planning applications, fly-tipping, and helped elderly residents at risk of homelessness.

Clive is now retiring. He says, “I could not be happier to have Tom taking my place alongside Carla. He is a hardworking young man who will do a fantastic job.”

Tom is a Bristolian, passionate about the city. He is standing for election to bring the voice of young people to the council chamber. He hopes to build on Carla and Clive’s fantastic work on issues like poor quality rented housing springing up across our area and the sluggish council response to the air pollution and climate crises. He works as a researcher at Bristol Royal Infirmary, which has given him the tools to cut through the spin and jargon to look for evidence-based solutions. He wants to use these skills to help build a stronger, greener community in Clifton Down.

Tom has already been working with Carla and Clive to fix problems around Clifton Down:
Reported tagging and loose paving stones
Liaised with Bristol Waste to get damaged bins replaced
Organised and took part in litter picks
Worked with ‘Close the Door’ campaign on energy efficiency in shops.

Choose a link below or find out which ward you live in here.